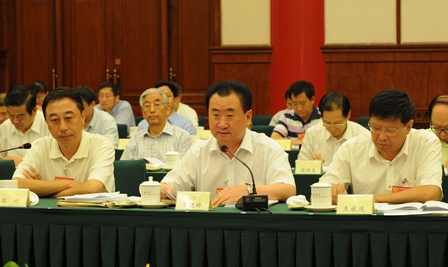 As Chairman Wang Jianlin noted in the speech, Wanda Group started investing in culture business since 2005, and currently it’s engaged in film showcase production, entertainment chains, grand shows and art collection. Wanda has had a total investment of Rmb 5.7 billion in culture business in the last six years, and it’s one of the companies with the largest investment in the industry in China. The return on investment has been healthy too; the annual return has been over 10%. He believed that there would be good room for private companies to develop in the culture industry.

I. There is good potential for the culture industry to grow bigger. Culture business is seen as a sunrise sector in the 21th Century. From a global perspective, culture has grown into one of the cornerstone sectors for the world economy. This has been proved by the growth experience of Wanda’s culture business; Wanda cinema has grown from an annual revenue of Rmb 120 million in 2005 to Rmb 1.7 billion in 2010 (14 times growth in 6 years) without any financial or policy support from the government. With this growth rate, Wanda cinema is expected to generate annual revenue of over Rmb 10 billion in 5 years, and become one of the largest company of its kind in the world.

II. Private companies have the potential to become the major force in the culture industry. In the last few years, most of the companies achieved stellar record in the industry and making investment in the major cultural projects have been private companies. Wanda’s Wuhan Central Culture District and Dalian Jinshi Culture Resort under construction had over RMB 20 billion investment in culture business, including the world’s largest film base, the only indoor film theme park in the world, the grand stage show representing the world’s top-class quality, and the complementary cultural projects.

III. Private companies possess competitive advantage. Culture business is a creative business, the two core concepts are innovation and a right mechanism. Compared to state-owned companies, the innovation ability and the flexible mechanism will give private companies the edge in the competition. For example, in the search for the adequate profit model in the culture business, Wanda has integrate the cinema, theatre and other culture facilities with the shopping centers and holiday resorts, so that they will complement and enhance one another, and the strategy has stimulated the profitability for all the cultural programs. The flexible mechanism of private companies will help them to acquire talents in the art and cultural field around the world, and strengthen the competitive advantage in the development of the culture industry.

1. Remove the hurdles from the system and mechanism in the development of the culture industry. Similar to other sectors, there still exist glass-doors and spring-doors, and private companies do not get the same treatment as state-owned companies.

3. Encourage the private company to explore the market overseas. The central government should set up special fund of support to assist the private companies in the going-out process,  enhance Chinese culture’s international influence, and boost China’s soft power.