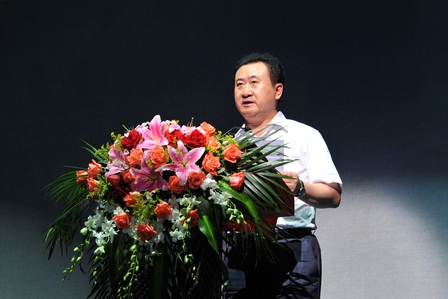 The large-scale original musical show, the Haitang Show, premiered in the Wanda Theater in Haitang Bay, Sanya on September 16th in its first presence in the national beach. Wanda invested in the production of the show. Luo Baoming, the Secretary of the CPC Hainan Provincial Committee, Jiang Dingzhi, the Interim Governor of Hainan, Jiang Sixian, the Secretary of the CPC Sanya Municipal Committee, Wang Yong, Mayor of Sanya, and other CPC leaders and government officials of Hainan Province and Sanya attended the show. Luo Baoming, Jiang dingzhi and Wang Jianlin, Chairman of Wanda Group jointly announced the start of the event, and the premiere kicked off.

The Haitang Show is the first work of Wanda in its venture into the holiday performance market. The show cost Rmb 60 million. It consists of 11 major chapters, and combined musical and high-tech stage equipment throughout the performance. The show is based on an ancient love story in the Haitang Bay area; with the music, dance, juggle, and cutting-edge stage technology on a stage of a 33 meters deep, with over 180 fancy costumes and the ultra-high-definition screen of 200 square meters, the stage is created as a dreamlike paradise. In addition to the 80 minutes excellent performance, the Haitang Show also went close to audience before the show. The fascinating show delivered by staff in their fancy costumes have made every step a pleasant surprise as the audience walked in the theater, and carried them away with sheer creativity; the experience will for sure make the night a unforgettable one. The production team is comprised of famous artists from seven countries; it’s a truly “China story demonstrated by international talents”. The show is directed by Emmy Award winner Gale Edwards; the script and the lyrics were both produced by veteran lyrics writer Chen Lerong, who has created a large number of popular songs performed by Sally Yeh, Ouyang Feifei, Aaron Kwok and many other famous singers. Also worth noting is, the average cost of one seat in the Wanda Haitan Bay Theatre was Rmb 120,000, a gesture that Wanda strives to bring to the audience luxurious experience.

Along with the preparation for the grand premiere of the Haitang Show, Wanda Group has also further upgraded all the facilities in the Haitang Bay Culture Centre, launched the IMAX cinema hall, and introduced comprehensive upgrading on the audio system for the Big Singer clubs. These will all together deliver an improved one-stop culture experience to Haitang Bay visitors.

On the Haitang Show premiere day, the IMAX hall of the Sanya Wanda Cinema embraced its grand opening, marking the first IMAS hall in Hainan. The hall locates in the beautiful Haitang Bay, and it’s the most southern one in China. The whole new IMAX experience will be the highlights of the Haitang Bay Culture Center.

Wanda Group is seeking to build a one-stop holiday solution comprised of hotel+ performance show in the national beach of Haitang Bay, Sanya. Wanda Performance Art entered a series of partnership agreement on holiday product development and marketing with Ctrip and Hilton Haitang Bay Hotel in May this year. This marked that the three major companies in the holiday-leisure- tourism chain will jointly introduce a series of tourism products revolving around Haitang Bay and the Haitang Show, and create a new model for the holidays at the national beach. As a must-see in Sanya, the Haitang Show will perfectly integrate with the growth of the international tourism island; it will not only fulfill visitors’ needs for appreciating the stunning scenery in Hainan, but also bring them a top-class holiday trip of rich cultural content, innovative design and luxurious quality.

As the largest commercial property developer in China, Wanda Group has transformed from the traditional business scope in recent years, and the core strategy for the future will incorporate high-end holiday properties and the complementary, world class holiday and entertainment model. Wanda Group will launch more world-class shows in Changbai Mountains, Wuhan, Xishuangbanna and other holiday destinations.