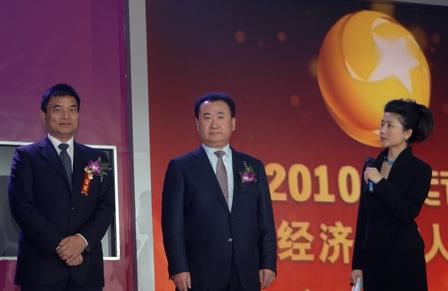 The launch of the 2010 CCTV Economic Person of the Year Award was held on 10th November at the CCTV Media Center. Wang Jianlin attended the ceremony representing the ten “Business Leaders of the Decade” selected in 2009. For this year’s selection, the biggest highlight is the addition of an international perspective whereby five sub-venues are set abroad and locally, and the event also added international judges and observers. Organizers worked closely with renowned international media to introduce this year’s award recipients to the world, allowing this grand event of the Chinese economic realm to be showcased to the world. Out the various event initiation ceremonies, Chairman Wang Jianlin lit up the event ceremony in Beijing. Responding to the host, Wang Xiaoya’s questions concerning his “message to the 2010 award recipients” and his “feel about 2010”, Chairman Wang Jianlin replied by saying “I hope this year’s Economic Persons will be more internationalized as China needs internationalization.” “In 2010, we have to thank the State for their change in the development model, allowing Wanda’s commercial fixed assets to have greater development opportunities thus this year’s results improved greatly compared to last year.” After the initiation ceremony ended, Chairman Wang Jianlin accepted a number of media interviews.