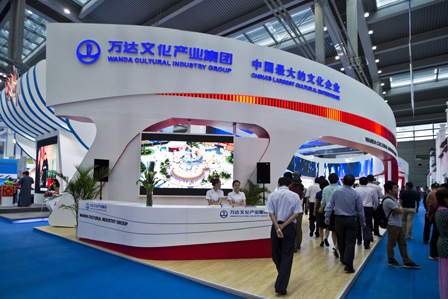 The pavilion of Beijing Wanda Culture Industry Group at the venue of the ninth China International Cultural Industries Fair.

Wanda’s 432sq pavilion, the largest one in the venue, has attracted much attention from government officials, media, businessmen and other visitors throughout the four-day event.

Officials from Guangdong, Hunan, Gansu, Guangxi and Fujian invited Wanda to invest in their provinces or regions after visiting the venue showcasing Wanda’s cultural tourism projects. Several cinema lines and entertainment, culture and tourism enterprises also expressed the hope to cooperate with Wanda. More than a thousand of visitors waited in line to get the interactive experience in the pavilion.

It is the second time for the group to attend the annual event. Wanda presented all of its culture brands including the American theater chain AMC, Wanda Cinema Line, theme parks, Wanda Media Company, the joint venture with Franco Dragone Entertainment Group, the film technology park, etc.

Next： Artist calls for culture cooperation with Wanda