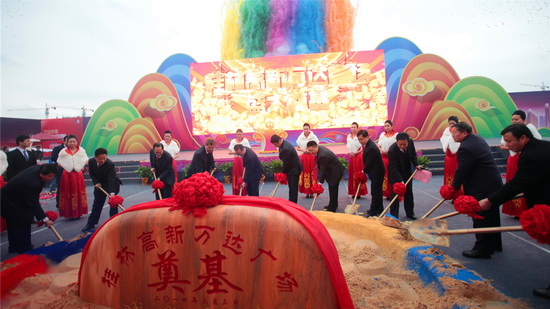 The Wanda Group held a groundbreaking ceremony for its High-Tech Wanda Plaza in Guilin, Guangxi Zhuang Autonomous Region on March 3.

The development will include a commercial center, an outdoor pedestrian street and luxury apartments. Upon completion, the plaza will fill the gap left by Guilin's lack of modern large-scale commercial centers. As a new city center, the plaza will accelerate the upgrade of the city's industry, boost consumption and create close to 10,000 jobs, generating billions in annual tax revenue.

"Guilin's traffic situation has been greatly improved in past few years," said Wang Jianlin, "Combined with favorable policies, Guilin has become a better investment destination. We are very optimistic about projects in Guilin, especially the Guilin Wanda Cultural Tourism City which is unique. The cultural tourism city will effectively promote the industrial upgrading and transformation, and boost the city to become an international tourism destination."

"It only took us 78 days from signing the contract to commence construction of the Guilin High-Tech Wanda Plaza. The plaza is planned to open before the National Holiday in 2015 while the cultural tourism city will be completed in 2017," said Wang.